Bollywood industry has been taken by storm by the #MeToo movement in India after many acclaimed stars, directors and producers have been accused of sexual harassment by none other then their coworkers and renowned personalities in India.

Latest on the list is popular Indian painter, Jatin Das, who has been accused of sexually harassing a woman 14 years ago. Despite allegations against her father, director Nandita Das will continue to support the #MeToo movement, she wrote in a statement.

“I met him at a family dinner hosted by my father-in-law in 2004, Delhi. We talked for a while after which he asked me if I had a few days to spare and could help him organize his work material. I was delighted to say yes. It would be an honour to work with a brilliant artist, to have the opportunity to see his priceless art close up.” 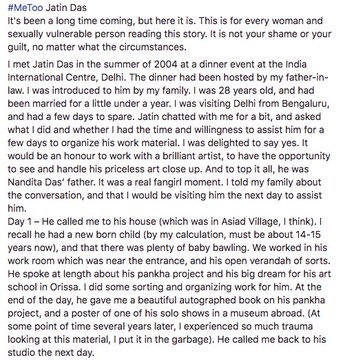 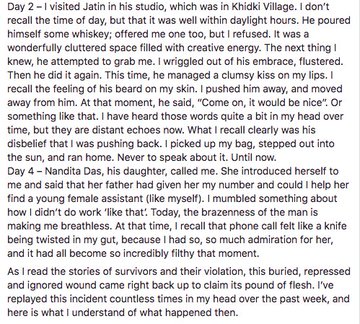 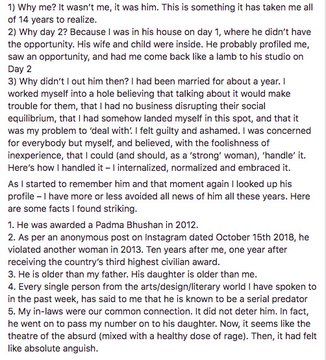 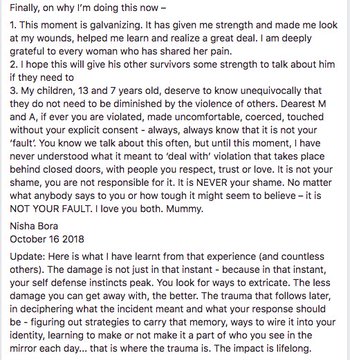 Nisha narrates her visit to his studio, in Khidki Village when he tried to ‘grab her’.

“He tried to grab me. I wriggled out of his embrace, flustered. Then he did it again. This time, he managed a clumsy kiss on my lips.”

Nandita Das shared a statement, clarifying that despite the disturbing allegations against her father, she will continue to extend her support for women who have endured the pain through the years.

“As a strong supporter of the #MeToo movement, I want to reiterate that I will continue to add my voice to it, despite the disturbing allegations made against my father, which he has categorically denied. I have maintained from the very start that this is the time we all need to listen so that women (and men) feel safe to speak up.”